This information was taken directly from the National Cancer Institute’s website per the link below.

Cancer is a term used for diseases in which abnormal cells divide without control and are able to invade other tissues. Cancer cells can spread to other parts of the body through the blood and lymph systems.

Cancer types can be grouped into broader categories. The main categories of cancer include: 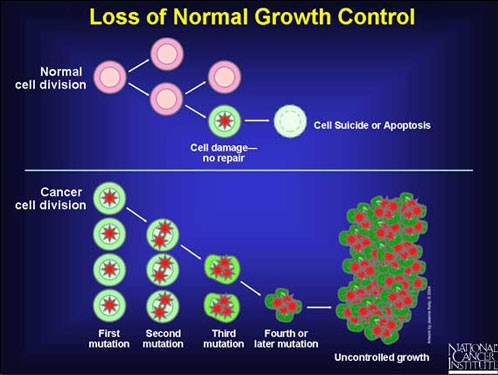 A report from the nation’s leading cancer organizations shows that rates of death in the United States from all cancers for men and women continued to fall between 2003 and 2007, the most recent reporting period available. (Read more about the Annual Report.)

Estimated new cases and deaths from cancer in the United States in 2011:

The risk of developing many types of cancer can be reduced by practicing healthy lifestyle habits, such as eating a healthy diet, getting regular exercise, and not smoking. Also, the sooner a cancer is found and treatment begins, the better the chances are that the treatment will be successful.